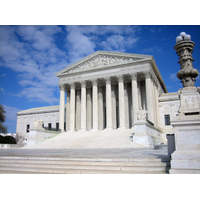 Military.com - The U.S. Supreme Court unanimously rejected a veteran's argument that his disability compensation should have been made retroactive to his date of discharge because his condition rendered him incapable of filing a claim within the required one-year window after leaving military service.

In a 9-0 opinion announced Monday, the justices rejected the arguments of Navy veteran Adolfo Arellano, saying that his case and others like it don't meet requirements for an exception from the rule that allows veterans to have their compensation backdated to the date they left service if they file within a year of separation.

The case, Arellano v. McDonough, was tracked closely by veterans and veterans service organizations for its potential to open the door for former service members to petition for backdated compensation under exceptional circumstances.

In an opinion written by Justice Amy Coney Barrett, the justices noted that in writing the law that included the one-year requirement, Congress made some exceptions, for cases of death and awards to spouses or veterans' children, or if new evidence of disability emerges.

"Despite its attention to fairness, Congress did not throw the door wide open in these circumstances or any other," Barrett wrote. "In all but one instance, Congress capped retroactive benefits at roughly one year."

Arellano served in the U.S. Navy from 1977 to 1981, a period in which he was assigned to an aircraft carrier that experienced a collision that "killed and injured several of his shipmates and nearly swept him overboard," according to court documents.

The Department of Veterans Affairs approved his claim and paid him retroactively to 2011, his date of filing.

Arellano appealed, saying he should have received payments retroactive to his discharge, since his service-connected mental health conditions prevented him from filing a claim sooner.

He argued that the statute of limitations should have been waived since he wasn't mentally able to file a claim before the time limit expired -- a legal concept known as "equitable tolling."

The Supreme Court justices said they took the case because of the split at the federal appeals court level.

Arellano's attorney did not respond to a request for comment by publication. While there are some legal options for Arellano to revisit his case using different legal arguments, the Supreme Court's unanimous decision limits his options.

The Supreme Court receives thousands of petitions on cases and takes roughly 70 to 80 a year. The justices heard Arellano's case on Oct. 4, the second day of the 2022-2023 term. The opinion was the first announced for the year.